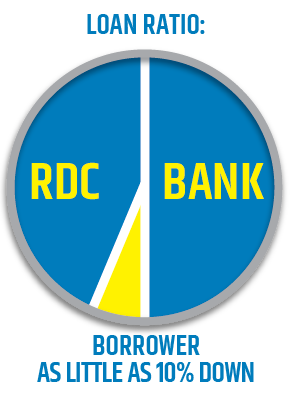 The Regional Development Company was certified by the U.S. Small Business Administration in April 1994 to administer the SBA 504 loan program for a seven-county area of Indiana consisting of Lake, Porter, LaPorte, Jasper, Newton, Starke and Pulaski Counties. In November 2003, the U.S. Small Business Administration deregulated the Development Company 504 Loan Program, allowing the RDC to operate throughout the State of Indiana.

In November 2013, the RDC expanded again into the entire Chicagoland region, including the Illinois counties of Cook, Will, Grundy, Kendall, DuPage, Kane, DeKalb, Lake and McHenry. In order to further assist the communities it serves, the RDC expanded again in 2014 and began administering Revolving Loan Funds for several local cities and counties.

Since it’s inception, the RDC has funded more than 500 loans, creating over 6,500 jobs and over $500 million in capital investment throughout Indiana and Illinois.

The RDC is also a proud supporter of the communities it serves, donating more than $250,000 cash to local economic development and small business initiatives.

History Of The Program

The Small Business Administration’s 504 Loan Program is a long-term financing tool for economic development within a community. The SBA 504 Program provides growing businesses with long-term, fixed-rate financing for major fixed assets, such as land, buildings and large equipment. A Certified Development Company (CDC) is a nonprofit corporation set up to contribute to the economic development of its community. CDCs partner with the SBA and private-sector lenders to provide financing to small businesses.

The Regional Development Company is certified by the U.S. Small Business Administration to work directly with businesses in accessing the same capital markets as publicly traded companies.  There is no cost to the taxpayer.  Private investment firms sell pools of government-backed securities in the capital markets to fund the 504 loan program.

Contrary to the belief that the SBA is only for businesses that can’t secure financing elsewhere, the 504 loan program is designed to assist existing, healthy, creditworthy businesses.  The credit requirements in this program mirror conventional underwriting practices of local lending institutions with one important difference:  The business can leverage 90% financing and conserve valuable working capital to grow sales and expand their work force.

Contact us to get more info to see if your business is right for a 504 loan. Lets get the ball rolling, one of our loan officers will be in touch with you shortly: